On the weekend, I took the kids away so that Theresa could do some spring cleaning. The results were amazing, as shown in the before and after shots: 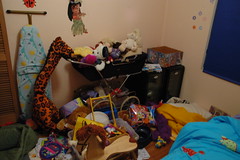 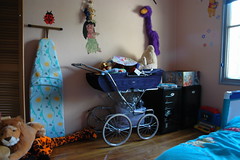 She has also planted herbs and vegetables.

Lunch from a bakery in Emerald, eaten at Emerald Lake Park. It wasn't quite as I expected: the water slide and paddle-boat-bike things were out of action and few people were around. But it was a lovely place to visit and wander around.

Seeing that there'd be another hour to go until the next train came through Lakeside Station (in the park), we returned to Emerald and the playground there. The kids enjoyed seeing trains, though not as much as expected. There was a "Day Out With Thomas" event on, and hordes of visitors were being shunted from one activity to the next.

Dinner with Dad and Kerry: dim sum and Peking Duck. Must get some of that duck - very nice. Eventually managed to get kids to sleep, and I wasn't far behind, but a leaking lilo, exciteable smoke alarm and dropping temperatures kept waking me up.

A visit to the Werribee Open Range Zoo, organised by Dad's Rotary club. BBQ lunch, followed by a safari tour on an impressive Back To The Future style bus (the sides came down to form steps). Photos coming soon. (I mean photos of the animals, but there's one of the bus also.) Tip: you'll get much better photos if you hold your camera up above the dirty windows than if you try to shoot through them.

Kids slept for most of the drive home, and I wanted to as well, but I managed to get over the microsleep phase by the time I found somewhere to pull over.
Collapse